In part 1 of the “A Better Arduino” series, I designed the simplest possible STM32F7 breakout board. This first iteration PDP board is not nearly as easy to use as an Arduino. The primary problem that users must first properly wire a debugger to the PDP to flash their code. The secondary problem is the lack of serial / USART functionality to do IO with the host machine. The goal of the debugger project is to address these issues by implementing a debugger on a custom circuit board that implements serial communication. Such a circuit could later be embedded into an all in one development solution with the plug and play functionality of Arduino in conjunction with a fully featured debugging suite. I completed the debugger project in order for it to be used by the Queen’s Formula team. The ultimate goal is to lower the barrier to entry of STM32 for new team members so that they can leverage all of its extra capability without any added complexity.

The design of the debugger was quite straight forward as the ST-Link debugger circuit used by STM32 is standardized. The resources I referred to in order to produce the schematic are listed below.

With the debugger functionality implemented in the schematic, the final step was to power the MCU. 100 nF decoupling capacitors are placed on each VDD pin of the debugger’s MCU. The input voltage from the USB connection is 5 V and the MCU logic level is 3.3 V. Thus, I selected an LDO for voltage regulation that JLCPCB stocks in their library so I could send the final board out for assembly. To learn more about JLCPCB’s SMT assembly service, check out my post on using the service here.

Below is an embedded view of the debugger project which includes the schematic documents, PCB layout and bill of materials. The raw Altium Designer files can be found here. The structure of the debugger Altium project differs from my previous posts as it uses multiple schematic sheets. This is known as a hierarchal schematic design. Each sheet contains a sub-circuit which is tied to other sub-circuits in the parent schematic sheet, which allows for functionality to be divided and organized in smaller schematic documents for larger designs. The sub-circuits are tied together using ports and sheet symbols. A port is similar to a net label, but is used for making connections between schematic sheets instead of normal net labels whose scope is limited to the given sheet. Sheet symbols are used to to take a circuit in another sheet and place it in the current schematic. Ports are then used to connect to the internal nets of the sheet symbol.

The debugger was ordered with the JLCPCB SMT Assembly service, a photo of the first prototype is given below. You may notice a few small differences between the layout presented in the embedded project compared to the physical board. This is because the board is actually an earlier iteration of the debugger for personal use and testing. The layout presented above includes a few small revisions that I made for the debugger’s wider use by the Queen’s Formula Team. The primary difference lies in the silk screen, which is more descriptive by including a full pinout for each connector on the bottom of the board and Queen’s Formula logo. In addition to aesthetic changes in the silkscreen, there are also some small layout tweaks, with the main change being the regulator enable jumper, which was removed after the LDO circuit was verified to be correct. Another small layout change was switching out the reset jumper for a button. 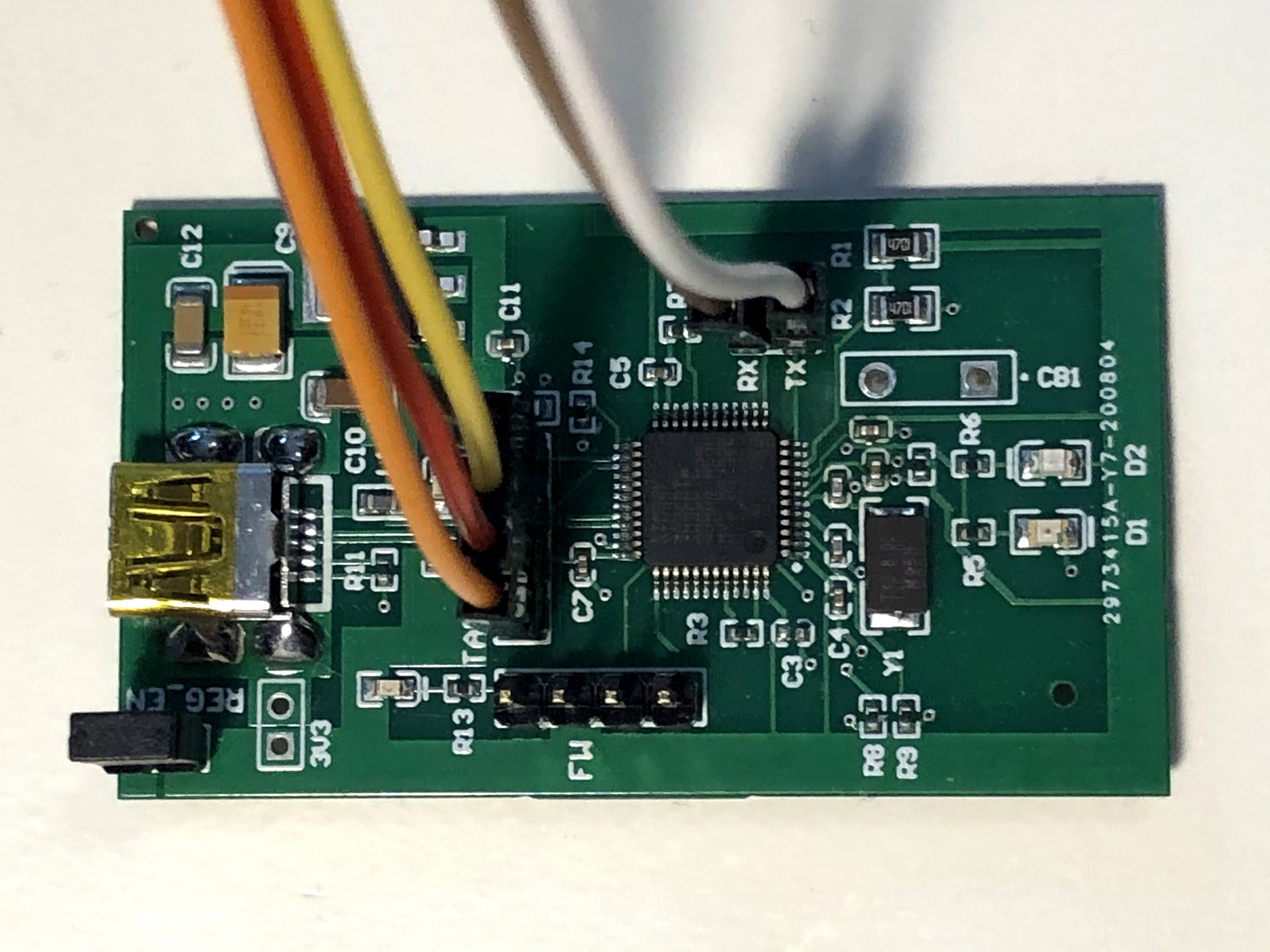 All of the surface mount components in the figure above were soldered by JLCPCB, with the exception of the USB connector, which was not available from JLCPCB and done by hand.

Software and Board Bring Up

The board testing and bring up can be summarized in the steps listed below.

The power on test went smoothly on the newly delivered debuggers. A USB connector was soldered to each of the 5 units from JLCPCB and then connected to a USB port. The 5 and 3.3 V power LEDs lit up, thereby properly indicating the correctness of the regulator/power circuit. An example of a powered up debugger can be found in the thumbnail for this post.

The ST-Link firmware is not open sourced by ST. Thus, it can only be obtained by pulling the binary off an existing debugger or from another source that has already completed this process. This blog post has instructions on where to find the firmware. The closed source nature of the software prevents me from linking to the binary directly. The upload of the debugger firmware worked as expected by connecting this ST-Link debugger to the debug header of the debugger’s MCU. After uploading, the debugger board was connected directly to the computer via USB and detected properly by the ST-Link Windows utility provided by ST.

Testing Connection to a Debug Target

I tested the debugger by connecting it to the PDP Board as a test target. The embedded video below shows the debugger successfully connected to the PDP in through ST-Link Utility program while also supplying power to the PDP through its 3.3 V output.

Unfortunately, the initial USART passthrough test with ST-Link firmware did not work. I subsequently discovered that there is a different ST-Link firmware binary needed to support the USART passthrough. Due to the firmware being closed source, my only option was to pull it off a development board that already had the firmware, as I was unable to fnd it online. A comprehensive series of blog posts on capturing the ST-Link with COM port support can be found here. The post mentions a way of getting equivalent functionality without ST-Link through the Black Magic Probe project (Hereby referred to as BMP). The BMP project is open source and supports USART passthrough. Conveniently, the project already had a build profile for turning ST-Link debuggers into BMPs. I followed a tutorial and uploaded the BMP firmware to my debugger board. Unfortunately, only the USART passthrough worked but not debugging and upload. After probing my board, I found that the BMP firmware uses different pin assignments for the SWD pins. Specifically, they use a different pin for clock. Since the project is open source, I modified the pin definitions and recompiled the firmware. The final result is a fully working board with serial and debug support. For those curious about the small change I made to the code, you can see the commit diff on my fork of the BMP repository here.

Overall, the debugger project is a great step towards an easy to use development platform built on top of STM32. Future posts will involve integrating the debugger into STM32 development boards and setting up a software workflow with the black magic probe debugger.