The purpose of the Flex Equalizer Project (referred to in this report as the “FE Project”) is to provide a unique project embedded right into the undersigned’s engineering report, thus developing the critical skills of surface-mount soldering and design on flexible PCBs. The undersigned’s particular flex PCB design is a flexible equalizer building on top of the original GE Project. The PCB is shown below: 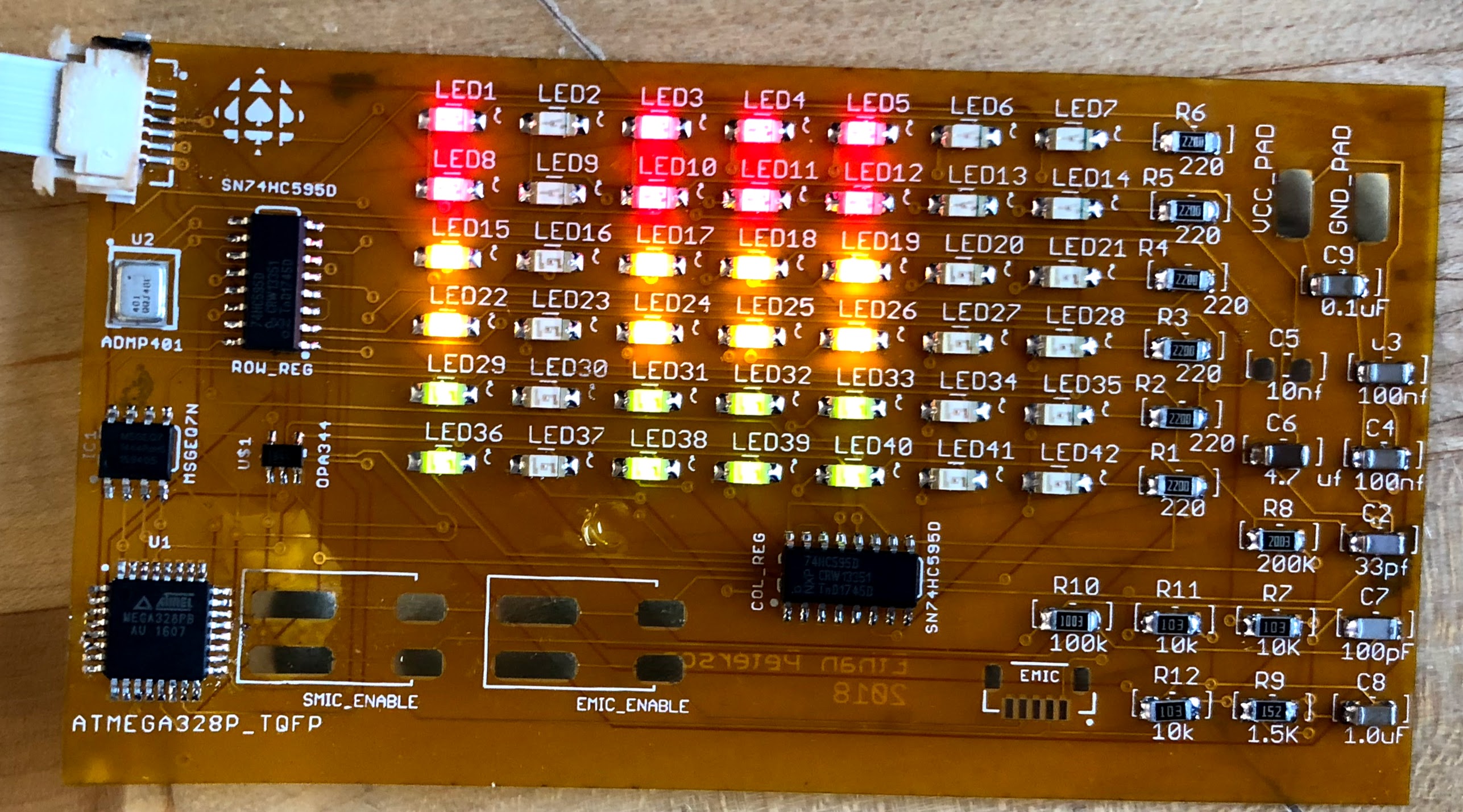 The first skill of PCB design was highly improved upon in the FE Project due to the high complexity of this circuit unifying an LED matrix and equalizer circuitry. The addition of unfamiliar surface mount components that had not been tested in the prototype only made this more challenging.

The second skill acquired in the creation of this project was surface mount soldering. The undersigned had little to no surface mount experience heading into this project, thus making the soldering process difficult but important and rewarding.

The third and most important skill improved upon in this project was assembly programming. A second iteration of the equalizer code was written in AVR assembly, which presented a unique challenge and opportunity to gain a stronger understanding of low-level usage of the ADC (analog to digital converter).

The FE Project improves upon the original GE Project developed in the TEI3M course. The FE used in the project is also a graphic equalizer, however, it is mounted on a flexible PCB using fully surface mount components so it can be laminated into a page in the undersigned’s engineering report. The second key difference between the FE and its through-hole predecessor is the usage of a 7x6 LED Matrix to display audio levels as opposed I2C based bar graphs. The use of a multi-plexed LED Matrix with standard shift registers also eliminates the need for libraries in order to write code for the FE, thus allowing the code to be re-written as mid-level AVR C or AVR Assembly.

The development of the FE Project is comprised of four important steps, consisting of prototyping, PCB design, soldering and programming.

The first of three difficult steps to complete the FE Project was prototyping. Although the undersigned completed an equalizer project on two occasions and completed similar circuits on several occasions, there were new obstacles to overcome in completing a properly functioning surface mount version. The first challenge was outputting to an LED matrix, which was summarily bypassed thanks to an LED matrix Arduino shield that the undersigned had previously developed, thus avoiding a copious amount of extra wiring. The second difficulty related to power delivery. Since the FE Project would ultimately be powered by a flexible solar panel that only provides 3.7 V as opposed to 5, it had to be confirmed that the circuit did not require the extra voltage or current. Fortunately, at the cost of LED brightness, the prototype still operated by drawing a small enough current that the solar panel was adequate under very bright sunlight. The final and most difficult obstacle was finding specialized surface mount components to replace the corresponding through-hole counterparts. The MSGEQ7 frequency analyzer chip was difficult to find in a SMD package along with a compatible SMD microphone. Microphones tested in the prototyping process failed to provide proper amplification, thus leading to an unresponsive equalizer. Eventually, a Sparkfun breakout board was found that employed an SMD microphone and used a separate amplifier chip for a strong signal. The undersigned was unable to obtain this board during the prototyping process so a through-hole microphone with amplification was used to emulate the surface components that had not yet arrived. As the circuit for the Sparkfun breakout board was posted online, it could later be integrated into the undersigned’s flex PCB. Programming the prototype was a straightforward process thanks to the use of Arduino C and previous experience programming these types of devices. 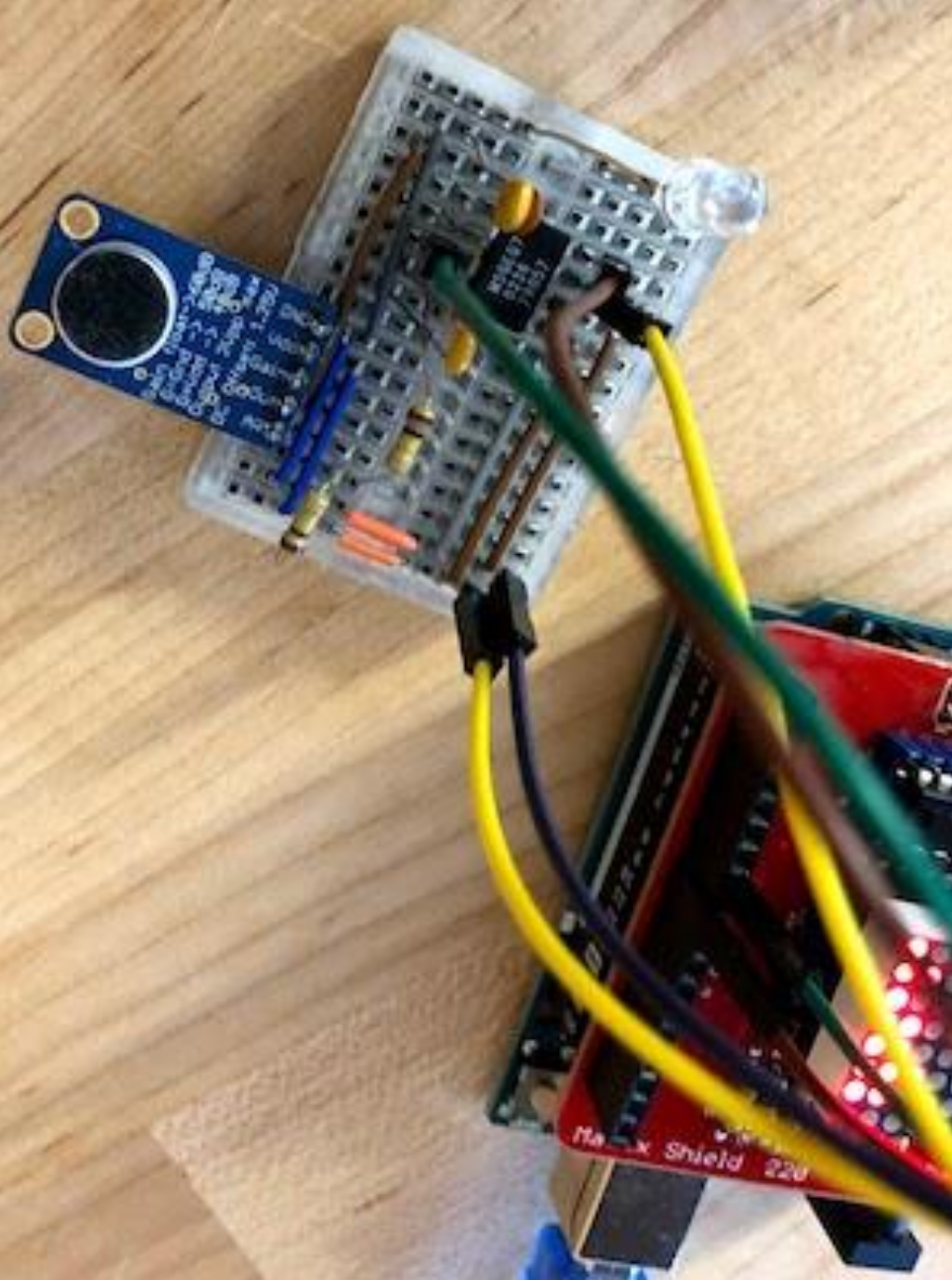 The second step was to design the FE in EAGLE, starting with a circuit diagram. First, a 7 x 6 LED matrix was created using 1206 SMD LEDs. The matrix was then connected to two SMD 595 shift registers in a multi-plexed configuration. The two shift registers were daisy-chained together, thus allowing them to occupy only 3 pins on the ATmega328PB Microcontroller. Secondly, the equalizer component of the circuit had to be created. The MSGEQ7 was added to the circuit and wired in an identical manner to previous equalizers. The FE presented a unique problem in getting the microphone output into the MSGEQ7. The SMD requirement for the flex page prevented the use of a through-hole microphone breakout board employed in previous equalizers. As a result, extra circuitry needed to be added to amplify and support the ADMP401 SMD microphone. The extra circuitry is pictured below. 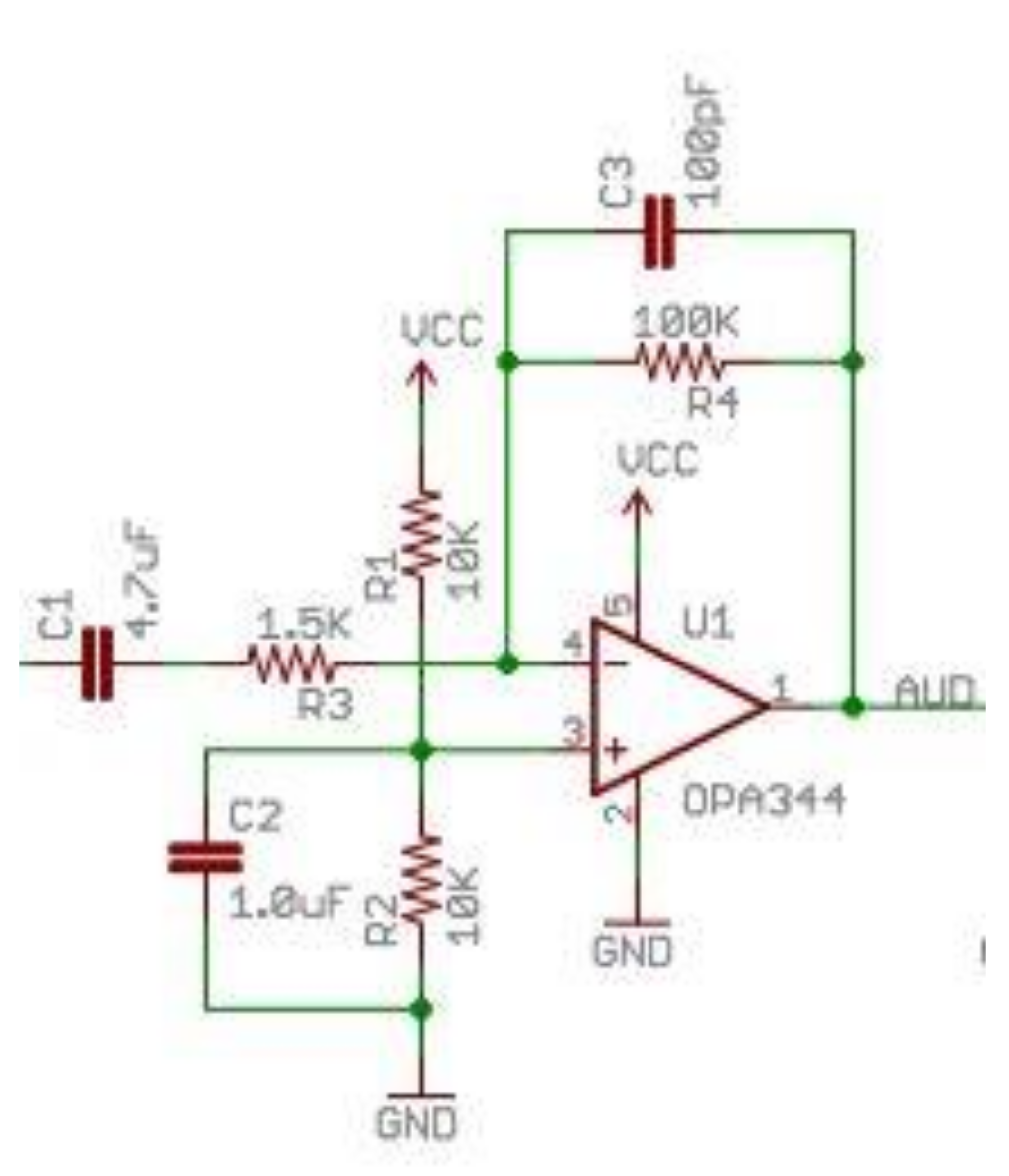 The third step was completion of all soldering work upon delivery of the flex PCB. The PCB has a dense and very small form factor, with many components placed closely together. Placing the solder paste on each pad individually proved to require too much precision to do completely by hand. As a result, the task was completed with the use of a stencil. The stencil for the board is a custom cut aluminum sheet which has a hole for each pad on the PCB. The flex PCB is prepared for soldering by taping the PCB to the back of the stencil and aligning each pad with the corresponding hole on the stencil. Once the board is mounted to the stencil, solder paste is placed on top of the stencil and spread across it using a squeegee. The paste is spread until it has sunk through the holes on the stencil and onto the pads on the PCB. With solder paste placed on the PCB, the components could then be mounted to be soldered via hot air. Each SMD component was placed on its corresponding pads using tweezers. Once all the components were placed on the board, the hot air gun was used to melt solder paste and solder the components. All the components fell into place without any bridging of the pads, with the exception of the ATmega328PB TQFP microcontroller. A few pads were bridged on the microcontroller, thus causing a short circuit which was corrected by using solder wick to un- bridge the pads. However, it should be noted that the exposure of the PCB to some heat during this repair process caused some warping in the area where the microcontroller is located, but no traces were destroyed. 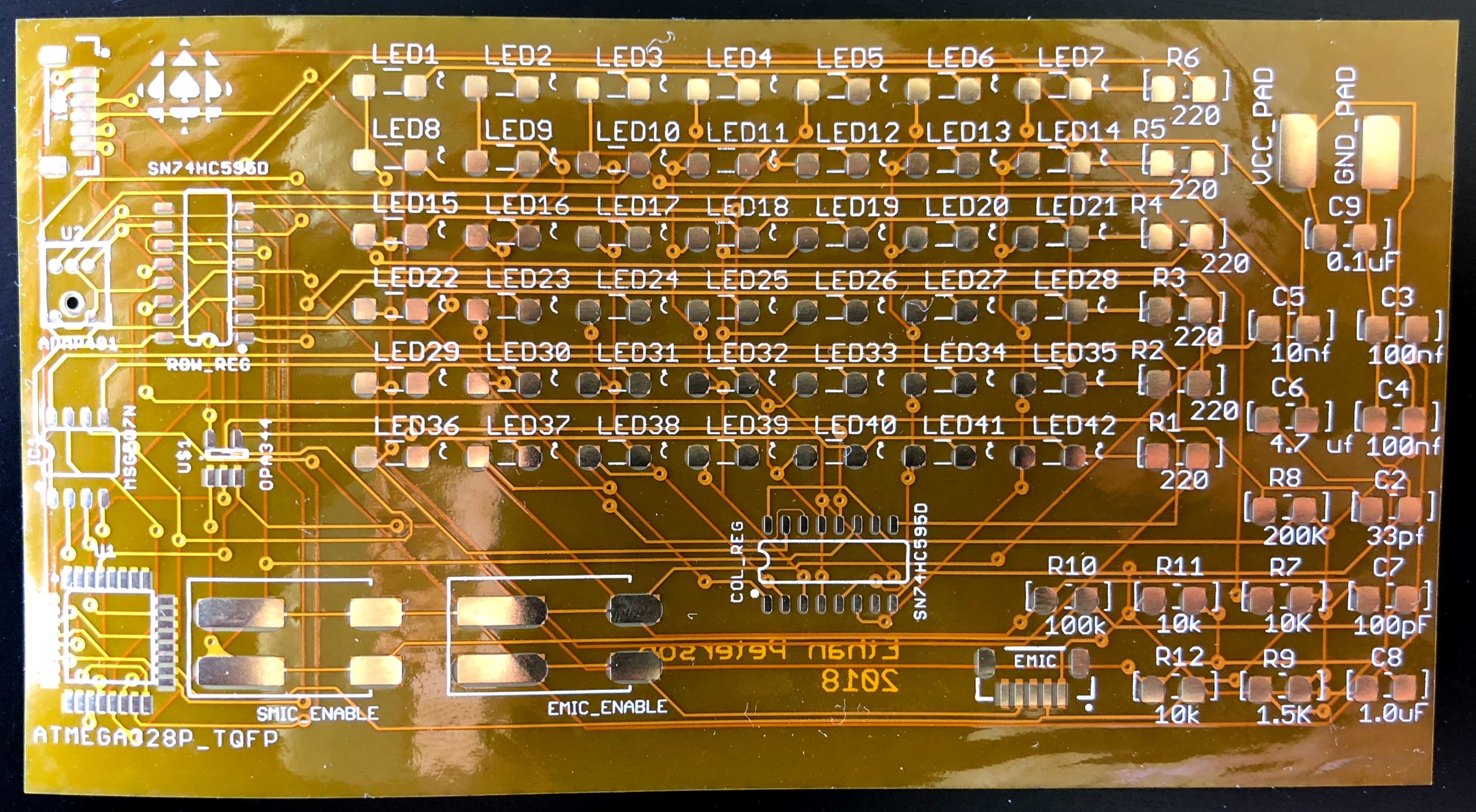 The final and most difficult step of the project was programming and debugging the FE. The FE worked well initially using Arduino C code. As the undersigned had written equalizer code on multiple occasions, it was decided to take the code to lower level assembly. The assembly was nearly complete when the ability to program the ATmega328PB on the PCB was lost. The issue arose when the flex cable was removed from the ISP connector of the original board and connected to the second FE board that had just cooked in the reflow oven. Unfortunately, when the flex cable was reconnected to the original board, code would no longer flash on the Arduino IDE and no result was shown after flashing the code successfully in Atmel Studio. After many hours of troubleshooting, it was discovered that an issue in the code prevented the PCB from showing any signs of functionality. This fix only exposed many more underlying problems with ISP flex ports on the board. The port and flex cable had very weak electronic connections, making it difficult to program the on board microcontroller. However, the first FE board to be soldered was beyond repair and no longer functioning. Although the second PCB was programmable, the connections were too weak to exit debugWire mode since the ICE was unable to read the device signature properly and disable the DW fuse. The microcontroller being locked in this mode proved to be difficult as it reduced the chip’s clock speed and removed the option of using ISP mode to program the chip with high level code from the Arduino IDE. Fortunately, the assembly code worked, but the reduced clock speed remained an issue. POV (persistence of vision) was restored to the matrix by reducing the prescaler to 8 from 1024 on Timer0, which schedules ADC readings. The prescaler change made everything appear to run faster but the issue was fully fixed when the F_CPU value was redefined at the top of the code forcing a clock speed of 8 Mhz. With one board up and running, it was time to repair the third board so two working boards could be submitted to the course instructor. This board also suffered from a weak ISP connection. To address the issue, a fresh ISP adapter was soldered and a new flex cable was used so that the connection could be as strong as possible. Unfortunately, the third board still did not program. Each solder link was examined with a magnifying glass. This lead to the discovery that the solder paste on the reset pin of the ATmega328P had not fully melted, thus making for a weak connection to a pin integral for programming the microcontroller. The hot air rework station was used to touch up this link, thereby allowing code to be successfully flashed onto the chip. The assembly code for the project was difficult to develop but much easier to debug once hardware issues with the PCB had been fixed. The assembly code consisted of two interrupts, a timer interrupt to schedule new ADC readings and an interrupt when the ADC completed a reading. Each time the ADC completed a reading, the code in the ADC_Complete label would run. The code in the label would copy the reading to a general purpose register and map the reading to a value from 0 – 5. Once the reading is collected, another label called showBand is run using the rcall instruction. showBand takes the reading and displays it in the appropriate column of the LED Matrix based on the frequency which was read from the MSGEQ7. The label knows what column to enable based off of the currentCol register, which shifts a single bit left each time a new reading is collected from the MSGEQ7 so that the next column over is enabled. The mapped reading value is then used to turn on the appropriate number of LEDs within the corresponding column of the LED Matrix. 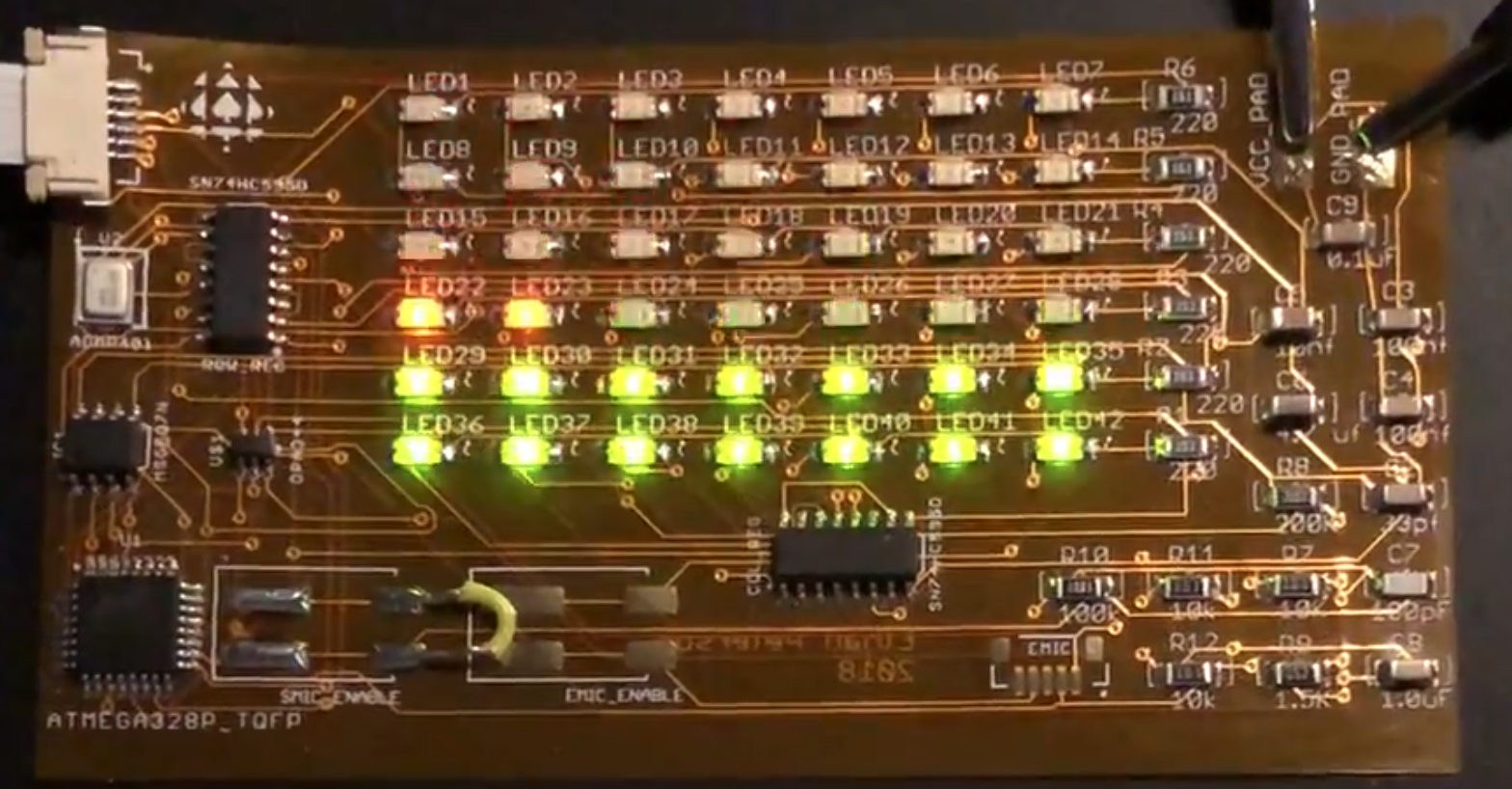 Flex Equalizer Up and Running 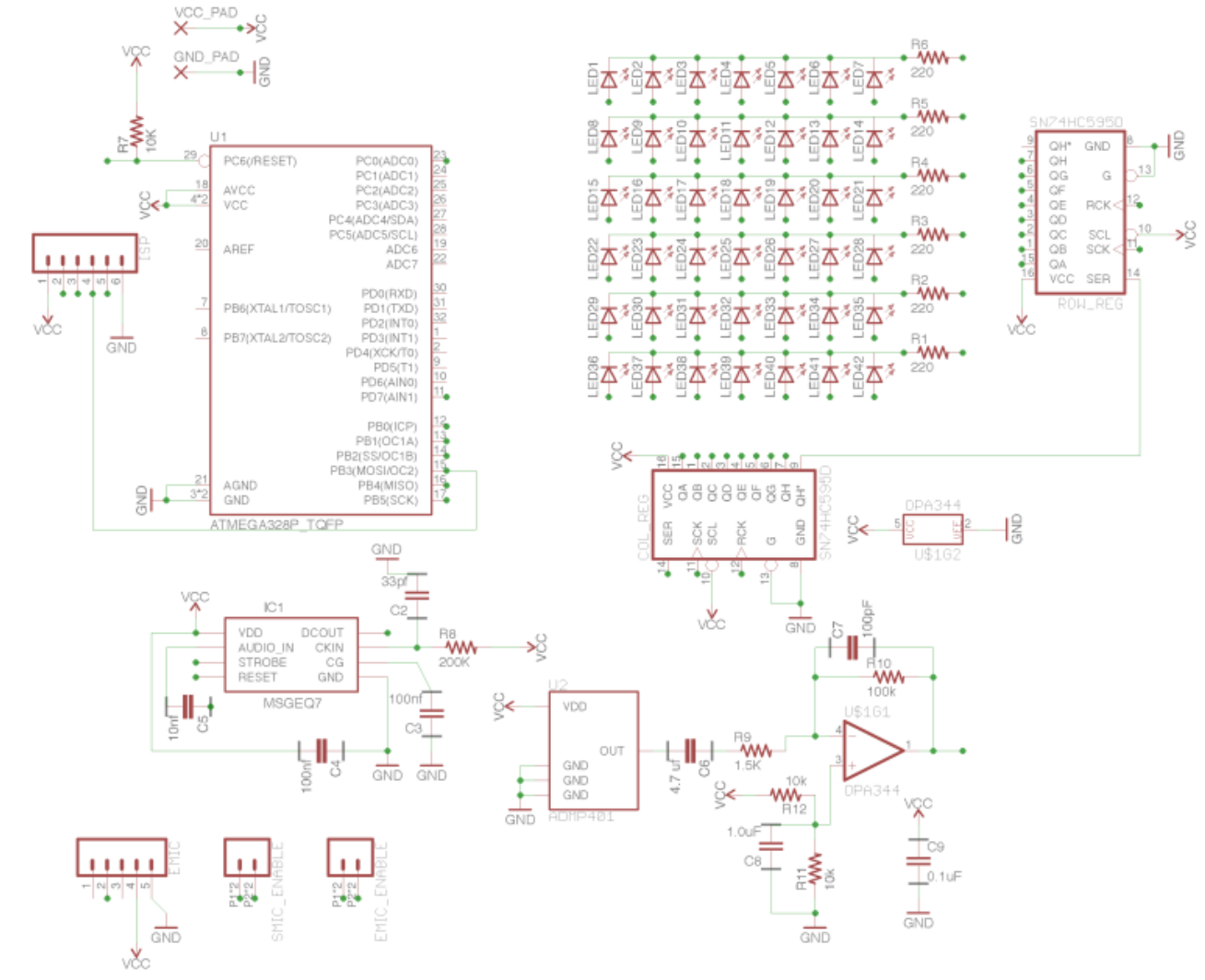 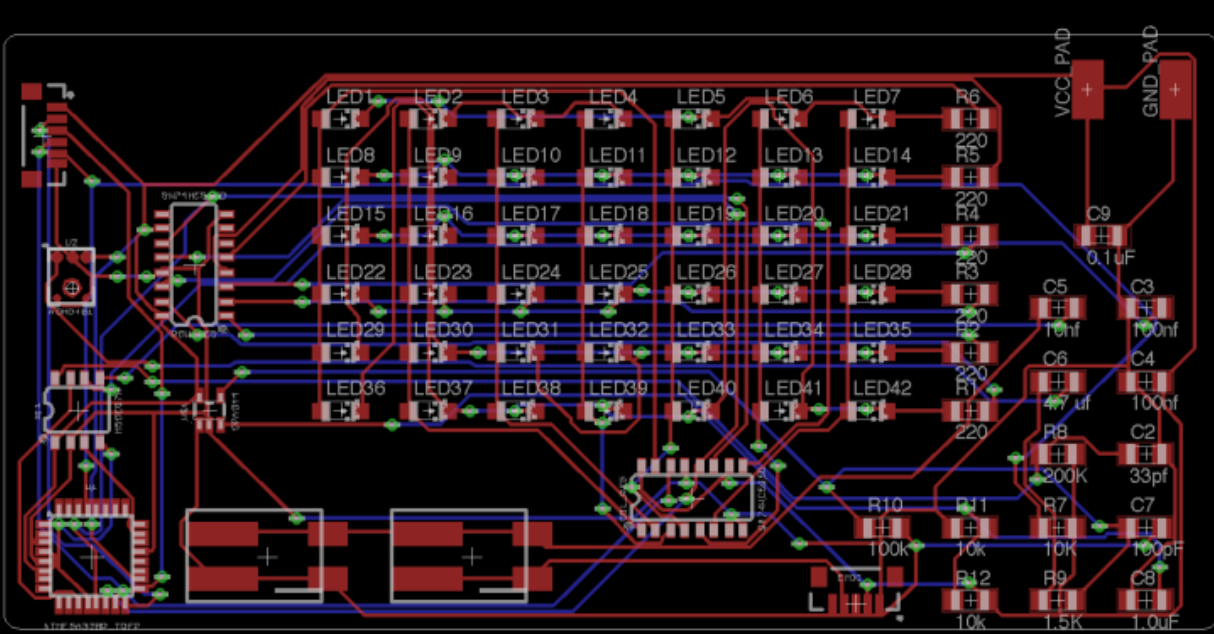 The source code can also be found on the undersigned’s GitHub repository.

Overall, the FE Project qualifies as one of the most sophisticated and challenging projects the undersigned has completed in the ACES Program. As a result of the FE Project, an absolutely stronger knowledge of surface mount soldering and assembly programming was developed. With respect to soldering, the undersigned acquired skills in the use of a hot air rework station as well as a reflow oven. With respect to assembly programming, the undersigned acquired skills specifically relating to the use of interrupts and hardware peripherals on microcontrollers, such as the analog to digital converter. More importantly, however, it should be noted that this project has created in the undersigned an unparalleled sense of pride and achievement with regard to one of the final projects as an ACES student.