The purpose of the BiColor LED Matrix Project (referred to in this report as the “BCLM”) is to improve the abilities of grade 11 ACES students in utilizing registers and bitwise operators through mid-level C programming. The BCLM project also serves as an opportunity for grade 11 students to be introduced to lower level programming, which will be further expanded upon in grade 12.

The first skill obtained in the BCLM project is the use of various bitwise operators such as left shift, right shift, bitwise AND, bitwise OR and bitwise NOT. The use of these operators gives lower level access to the registers of the microcontroller and therefore makes for more efficient programs.

The second skill acquired in the BCLM project is register manipulation on a microcontroller, which was used to form images on the LED Matrix and will be a very important skill for students who pursue the grade 12 ACES course.

Lastly, the essential skill of soldering is improved upon in the BCLM project as the BiColor LED Matrix used for the project is hand soldered.

The BCLM project consists of a 4x4 BiColor LED Matrix and an ATtiny84 microcontroller. 8 digital pins are required to control the LED Matrix. The ATtiny84 has two ports: PORTA and PORTB. The LED Matrix is hooked up to PORTA in the circuit as PORTA holds a full 8 pins on ATtiny84 while PORTB does not. By hooking up the LED Matrix to PORTA, the whole matrix can be controlled from one register. The fact that the LED Matrix can be controlled from one register is very useful when programming since students have to use register manipulation instead of Arduino functions like digitalWrite(). The construction of the BCLM project is broken up into the following 3 steps; soldering and circuit construction, animation planning and programming of the aforementioned animations.

The first step of the BCLM project’s construction was to solder the LED Matrix. The soldering process proved to be difficult as the legs of each LED had to be properly insulated with heat shrink to prevent contact between different LED leads that would cause a short circuit. In instances where heat shrink was omitted by the undersigned in error, the risk of a short circuit from leads of two different LEDs accidentally connecting was somewhat alleviated by using pliers to create the largest distance between leads as possible.

Another issue during the soldering process was keeping the LEDs aligned in an even grid. The alignment issue was solved by using a 3D printed matrix jig (pictured on the right) for hand soldering LED matrices. The jig kept the LEDs evenly spaced and made it easier to solder. Once the soldering was complete, the matrix was placed in the breadboard. The PORTA pins on the ATtiny84 were hooked up sequentially along the matrix from PA0 to PA7. Specifically, the upper nibble of PORTA was connected to the row pins of the LED Matrix while the lower nibble was connected to the columns.

The second step of constructing the BCLM project was to plan out what animations would be shown on the LED Matrix. Creating an animated pattern involved planning out the value for the PORTA and DDRA registers for each frame of the animation. Both the PORTA and DDRA registers consist of 8 bits, the behaviour of the PORTA pins on the ATtiny84 is controlled by the values inside of both these two registers. The DDRA register is the data direction register for PORTA. For instance, setting the bit to a 1 at position 0 in the DDRA register would set the corresponding PA0 pin to be an output. On the other hand, setting it to a zero would make it an input. The PORTA register controls the state of the pins assigned to PORTA on the ATtiny84. For example, setting the bit at position 7 to a 1 on the PORTA register would cause pin PA7 to go high while a 0 would cause it to go low. However, the ability to set pins high and low on PORTA can only be utilized when those pins are set to output in the DDRA register, which is why both registers must be used in tandem to create matrix animations. The process of creating images on the LED Matrix was simplified by a planning sheet provided to all grade 11 students, which helped the undersigned visualize the image and see what values would be required in each register to display the desired image. The planning sheet also reintroduced the use of hexadecimal numbering, which is a far more concise way than expressing the value on each register as binary.

The final and most difficult step in the construction of the BCLM project was writing the code. The process of writing the code began with creating more simple animations that utilized bitwise operators, iteration and delays as opposed to playing through a “hard coded” set of bitmaps. Each of these simple animations were placed in their own functions that were called in void loop(). Once the simple animations were complete, more complex functions requiring persistence of vision (POV) were pursued in void loop(). The use of POV allowed for irregular shapes that could not be shown in a single image but in multiple images displayed rapidly enough to look as though they are one. Please refer to the report on the TBMA project for additional information about how POV works. Pictured below is an image shown on the LED Matrix that relies on POV.

The second step to set up POV was to initialize a timer overflow interrupt that would change which image was displayed at regular time intervals. A timer overflow interrupt was required for POV because using the delay() function would stop the loop for the specified amount of time, thereby destroying the POV effect, which required the loop() function to be running at full speed without delay(). However, upon initializing TIMER1 and creating the interrupt service routine (ISR), the code inside the ISR would not run no matter the frequency of the interrupt. Following some troubleshooting, it was determined that timer overflow interrupts were not supported when programming the ATtiny84 on the Arduino IDE, resulting in the ISR being ignored by the compiler. Following this determination, it was concluded that the timing needed for POV without delay() could be created by using the millis() function. The millis() function returns the number of milliseconds that have passed since the Arduino started running. The millis() function was exploited by detecting every passing of the desired interval of time and running code to move on the next frame of the POV animation without the use of delay().

he third and final step of setting up POV was to write the code needed to display the bit maps. The medium used to hold all of the POV images was a two dimensional array of regPair structures called pov. A two dimensional array can be thought of as an “array of arrays”. In each array within the array was a set of regPair structures that when played through quickly enough would assemble one unique image, which could take advantage of both LED colors. A function called showImage() was developed to display the contents of the pov array. The showImage() function took a single dimension regPair array and the number of structures in it as arguments. The function used a for() loop to play through all of the array’s contents without delay forming the singular POV image. Once the desired time interval passed, a variable called currentFrame was incremented by 1 thereby changing which array the showImage() function was accessing by moving on to another array with the two dimensional pov array. Using this model for displaying the images has the advantage that only the two dimensional array needs to be changed in order to change what is shown onscreen. 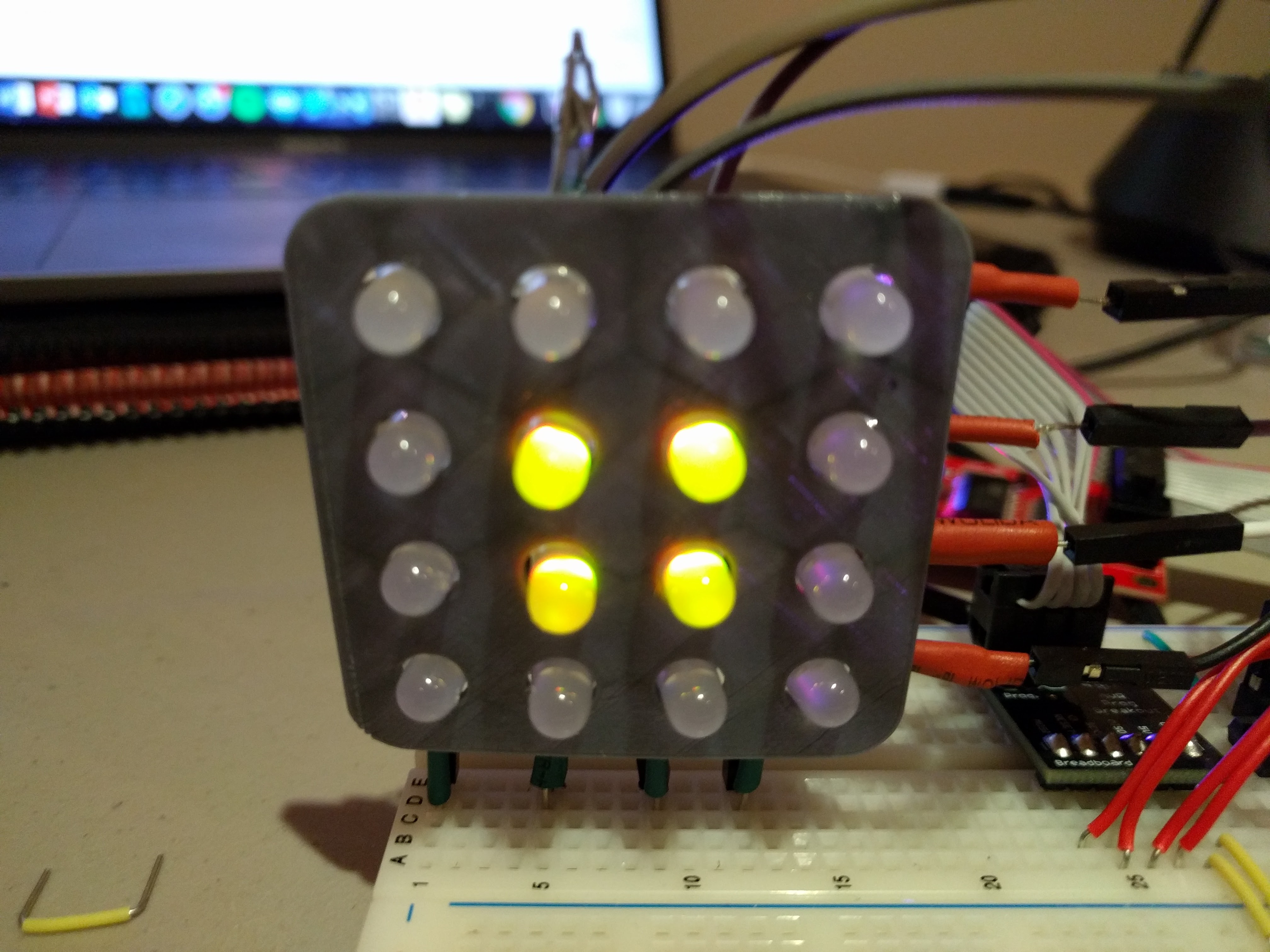 The BLCM project serves as a strong introduction to lower level programming and as a preview to the grade 12 ACES’ course where students will be introduced to assembly language. In particular, the project served as an excellent introduction to various bitwise operators and the operation of a microcontroller without the assistance of Arduino functionality.