The purpose of the 555 timer-based LED matrix animations project (referred to in this report as the “TBMA project”) was to demonstrate how a 555 timer could still be used in the context of microcontrollers, as well as improve programming skills and understanding of the 595 shift register.

3 key engineering skills were improved upon in the TBMA project:

Programming skills were improved as a result of having to program a smaller microcontroller with less SRAM and program space to work with, as well as having to program two daisy chained shift registers to display the desired images on the LED matrix. Soldering skills were highly improved upon during this project due to the fact that all of the columns on the half + size breadboard PCB were utilized in the circuit, thereby requiring an extensive amount of soldering and leaving little room for error in the soldering process. Circuit skills were also refined during this project as the project required extensive wiring and troubleshooting of the circuit and less attention to the code.

The TBMA project circuit was made up of 2 595 shift registers, an ATtiny85 microcontroller, a 555 timer and a 8x8 LED matrix. The 555 timer establishes an astable square wave pulse that is adjustable by a 10k potentiometer. The output pin of the 555 timer, which emits the pulse, is hooked up to the external interrupt pin of the ATtiny85. Each time the output pin of the 555 goes high, an interrupt is triggered that communicates to the ATtiny85 to show the next frame of the animation. This effectively allows the 555 timer and the user-adjustable potentiometer to control the framerate of the animations shown on the LED matrix. An additional three digital I/O pins of the ATtiny85 are hooked to the data, latch and clock pins of the shift register handling the columns of the LED matrix. The shift register controlling the rows is daisy- chained to the shift register controlling the columns of the LED matrix. The daisy-chaining of the two shift registers gives the ATtiny85 access to 16 new output pins, which control the 64 total LEDs on the LED matrix through a process in the code called scanning. The scanning takes place within a function in the code called displayBitMap(). A bitmap consists of an array that holds 8 bytes. The displayBitMap() function shifts the binary values from the first byte of the array into the column shift register and as it is the first byte of the array, it is shown on the first row of the LED Matrix. The function then turns off the first row and shifts out the byte to the column shift register to be shown on the second row. This process continues until each row has been shown once. Despite one row being enabled at a time, the scanning process takes place so rapidly that it appears as though all of the individual illuminated rows on the LED matrix are illuminated simultaneously. This is due to an optical illusion called persistence of vision. Persistence of vision is an optical illusion whereby multiple discrete images blend into one. In this case, the individual illuminated rows on the LED matrix are perceived as one image.

The first step in the construction of the TBMA project was the creation of the circuit. The circuit was initiated by establishing an astable pulse from a 555 timer. The 555 timer was then hooked to a potentiometer so the speed of the pulse could be adjusted. Additionally, an ATtiny85 was added to the circuit along with two 595 shift registers. The ATtiny85 was hooked up to the output pin of the 555 timer, along with the first of two 595 shift registers. The second shift register was daisy-chained to the first, allowing the ATtiny85 to control 16 new pins with only 3 of its own. Following the wiring of the integrated circuits (ICs), the next step was to set up the LED matrix. Setting up the LED matrix was an arduous process of testing each pin on the matrix to determine what column or row it represented. The purpose of each pin on the matrix was noted on a diagram that was used for reference when wiring the matrix through different iterations of the circuit. The final step in the construction of the circuit was the connection of the LED matrix to the shift registers and the mapping diagram was used for reference during this step.

The final and most difficult step of constructing the TBMA project was soldering. Since the circuit contained 4 ICs and an LED Matrix, a substantial amount of wiring had to fit onto a half+ size Adafruit breadboard PCB. Specifically, upon completion of the soldering process for the circuit, all of the available columns on the board had been completely utilized. The limited space made for a challenging soldering process where any errors would require restarting the entire process. However, it should be noted that the breadboard prototype was available for reference when soldering, which helped with the process immensely. 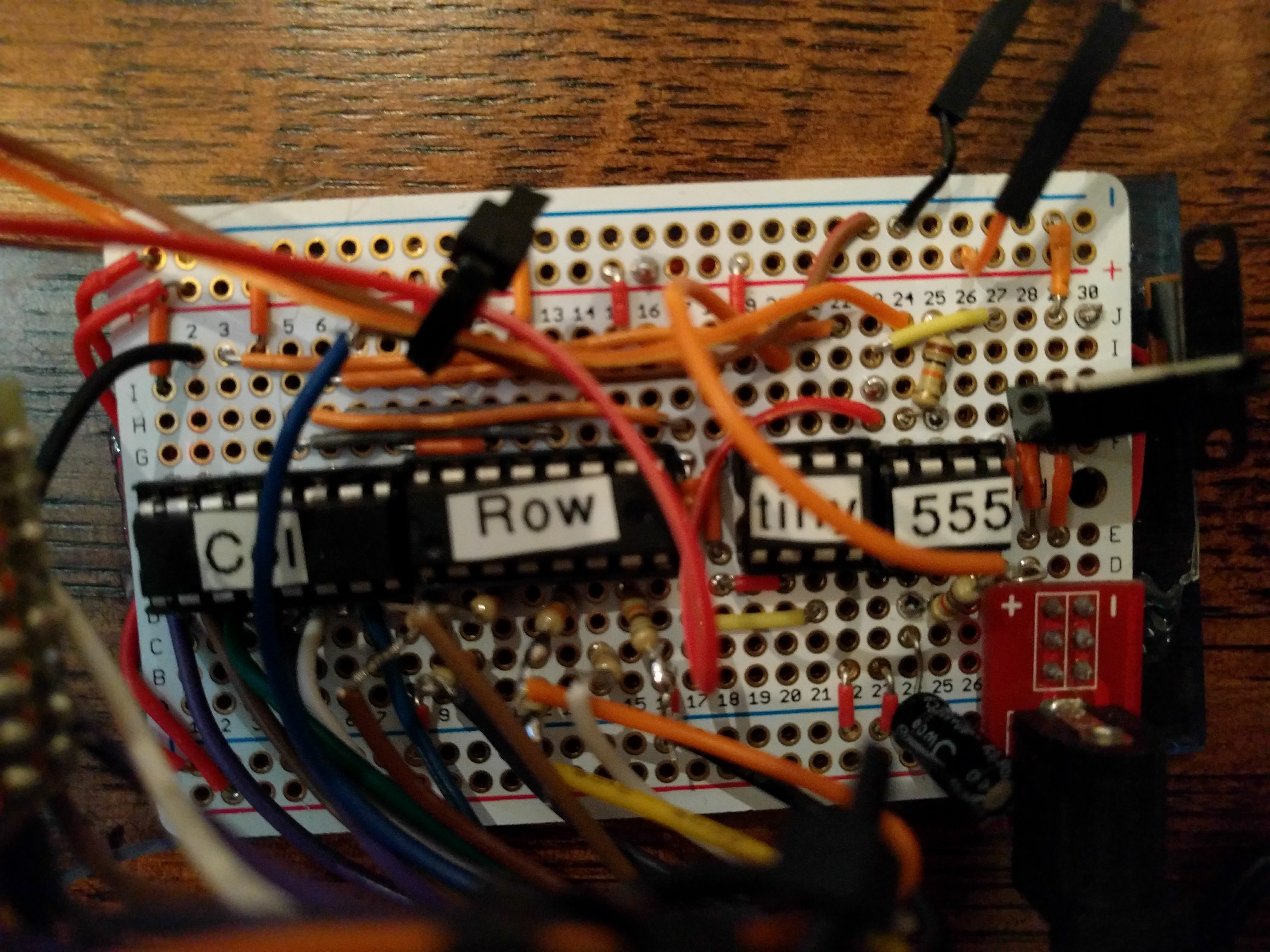 Overall, the TBMA project was an ambitious undertaking in the areas of circuit building, programming and soldering. The project was arduous but highly rewarding upon its completion. The TBMA project allowed the development of essential skills relating to the wiring and programming of shift registers to control LED matrices, making the project a great introduction to potentially more complex projects involving LED matrices.