The purpose of the Wireless Communication project (referred to in this report as the “WC Project”) is to learn the essential skill of wireless communication between Arduino boards, as well as reinforce time management and collaborative skills.

The second skill reinforced through the completion of the WC Project is time management and collaboration. The WC Project requires a partner to use his Arduino and wireless module as the transmitter or receiver for communication. Working on a project of this type with a partner adds a new layer of complexity in terms of time management and collaboration skills needed in order to successfully complete the project.

The WC Project is made up of two unique circuits. The first circuit is the transmitter, which consists of an Arduino connected to a wireless module. The second circuit acts as the receiver, consisting of an Arduino, wireless module and an LED Matrix Shield. However, the LED Matrix Shield designed by the undersigned was not initially the display device. The initial display device was an LED bar graph, which displayed the characters sent by the transmitter in their binary form. Students were encouraged to improve the base circuit that used a bar graph. The undersigned and his partner selected the LED Matrix Shield to display the letters sent over wireless, as opposed to their binary representation. With both circuits completed, Arduino code is used to set one circuit as the transmitter and the other as the receiver, transmitting the data by entering it into the serial monitor. 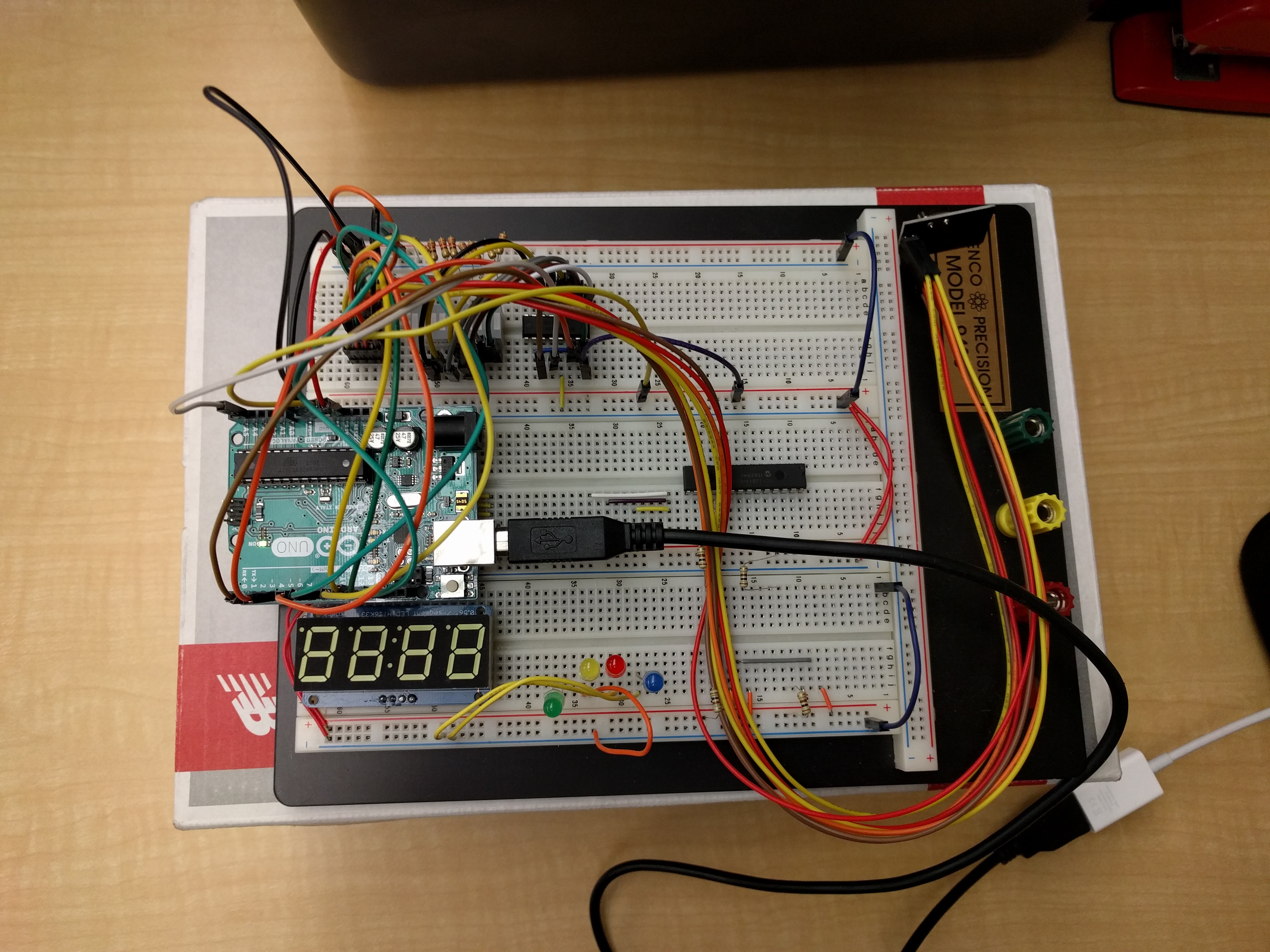 The first and simplest step in the construction of the WC Project was to build the NRF24L01 demo circuit, which used two of the wireless modules to change the brightness of an LED connected to the receiving Arduino using a potentiometer. The code to complete this introduction was provided in class and served as a basis for the code in the actual project. 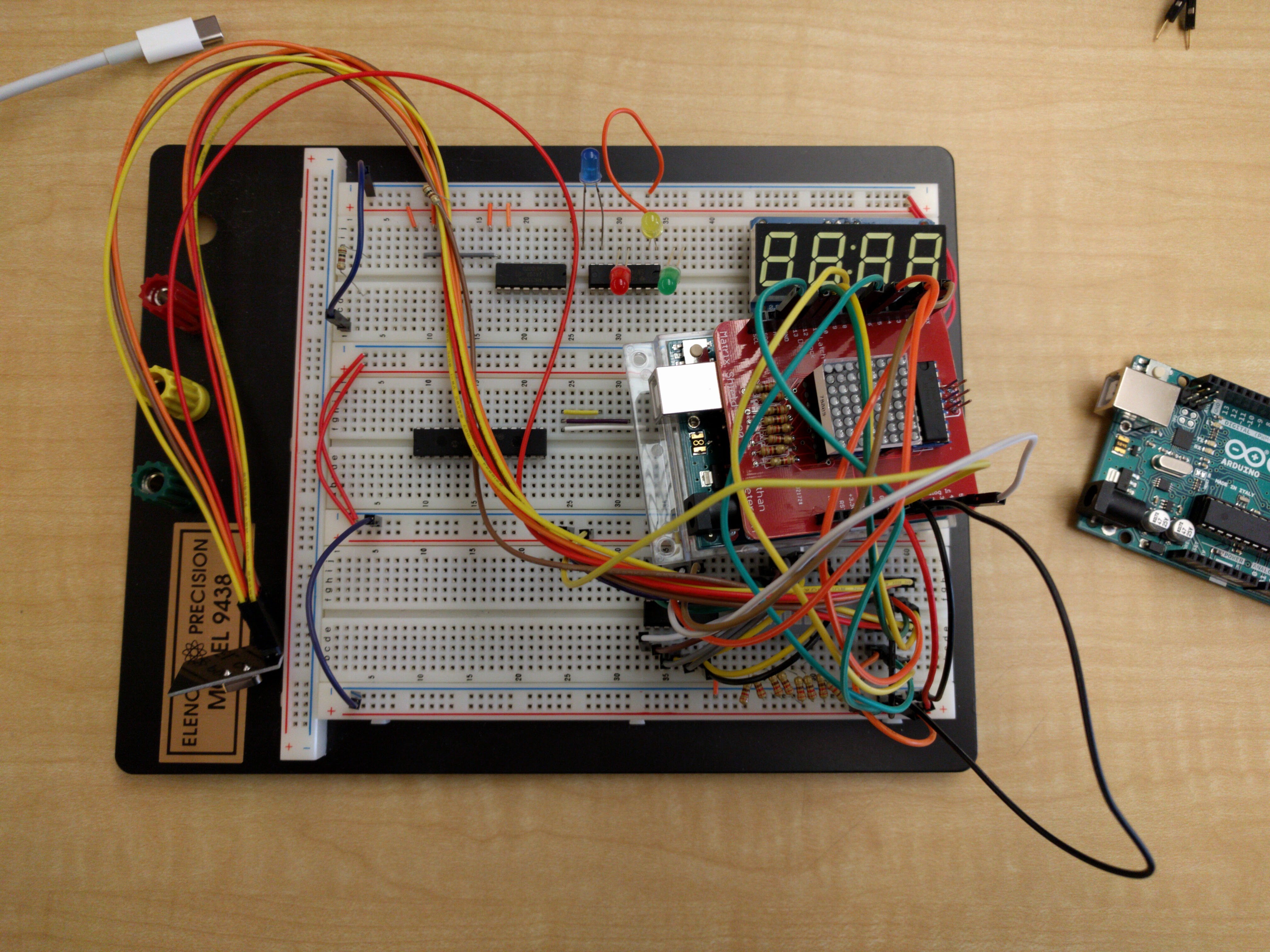 The third and most difficult step in building the WC Project was using an LED matrix as the output device. Displaying the received character on the LED Matrix Shield was very difficult at first. The shield was placed atop the Arduino Uno, which acted as the receiver. The wireless module was then hooked up to the female headers on the shield. After the addition of the shield, an issue arose where no data at all could be transmitted between the Arduinos or displayed on the LED matrix. Following a long period of arduous troubleshooting, it was discovered that the pins used to drive the shift registers and LED matrix on the shield are the same pins that were hard wired for the SPI protocol in the radio library. This issue was circumvented by disconnecting the shield from the Arduino and connecting different pins on the Arduino to the shift register pins on the shield. Once the shield was properly set up, the ASCII value for each

letter in the alphabet had to be associated with a corresponding bitmap to be displayed on the LED Matrix. For in-depth information on bitmaps and displaying images on an LED matrix, refer to the TBMA project report in this document. The undersigned’s partner, Jasper Schaffer, provided the bitmaps for every letter in the alphabet, which were associated to their corresponding ASCII value using a large switch case. A big switch case to handle the issue of matching ASCII values with the correct bitmap was not the initial plan. Initially, the plan was to save the bitmaps in EEPROM, however, each address in EEPROM only has space for one byte while a bitmap for the LED matrix consists of 8 bytes. The idea was to store each bitmap in the address that matched its ASCII value, which would make collecting the correct bitmap for the received character very simple. Since each bitmap would take up 8 slots in EEPROM, it was impossible to save a bitmap at the correct address as that address would already be populated with the data from another bitmap. For instance, the ASCII value of the character “A” is 65. If the bitmap for “A” was saved at EEPROM address 65, address 66 (which is the ASCII value for “B”) would already be overwritten with data from “A”. This convenient model for collecting character bitmaps would only work with bitmaps that occupy one byte of space. Once the switch case was completed, the matrix would display the correct bitmap for the ASCII character received.

Overall, the WC Project allowed for the essential skills of wireless communication, as well as time management and collaboration to be developed. This project resulted in a final product that can be expanded upon into various interesting projects in the future.