The purpose of the Fingerprint Enabled Door Lock (referred to in this report as the FEDL) was to create a useful and fun device while bolstering knowledge of the I2C bus from the last challenge, improving programming ability and most importantly, using EAGLE to design custom PCBs.

The first skill that was improved in this project was the use of the I2C bus. Knowledge in this case was improved following an in-class unit on the interface and Challenge 3.

The second skill improved throughout the duration of the FEDL project was programming. The Arduino sketch for this project was the largest written to date due to the various components that were used.

The third and most important skill obtained during the FEDL project was a working knowledge of the Cadsoft EAGLE software, which is used for the purpose of designing custom circuit schematics and boards. These designs can subsequently be submitted to a PCB fabricator for production and shipment of custom PCBs. The skill of PCB design is essential for larger circuits and projects where a standard proto-board cannot be used.

The FEDL project consists mainly of a MCP23017 I2C I/O expander, an LED bar graph, a Chronodot, an I2C 7-Segment Backpack, a servo motor and an Adafruit Fingerprint Sensor. The Circuit is housed on a custom PCB, connecting the I/O expander to the Arduino along with the Chronodot and 7-Segment Display via I2C. The custom board connects the I/O expander to the LED bar graph and button. The custom PCB also has input pins from the Arduino to communicate with the fingerprint sensor and servo outside of the I2C bus. With the custom board tying all of the components together, Arduino code can be used to create an effective door lock system.

The construction of the FEDL is broken down into 3 steps: Prototype circuit, board design and fabrication and the code.

Prototyping the circuit is the first and easiest step in the making of the FEDL. Since the circuit contains many I2C components, the wiring for most of the circuit involves connecting the SDA and SCL pins to the various components. The connection of the fingerprint scanner and servo motor requires only 3 pins each, making the wiring of the FEDL circuit extremely straightforward. 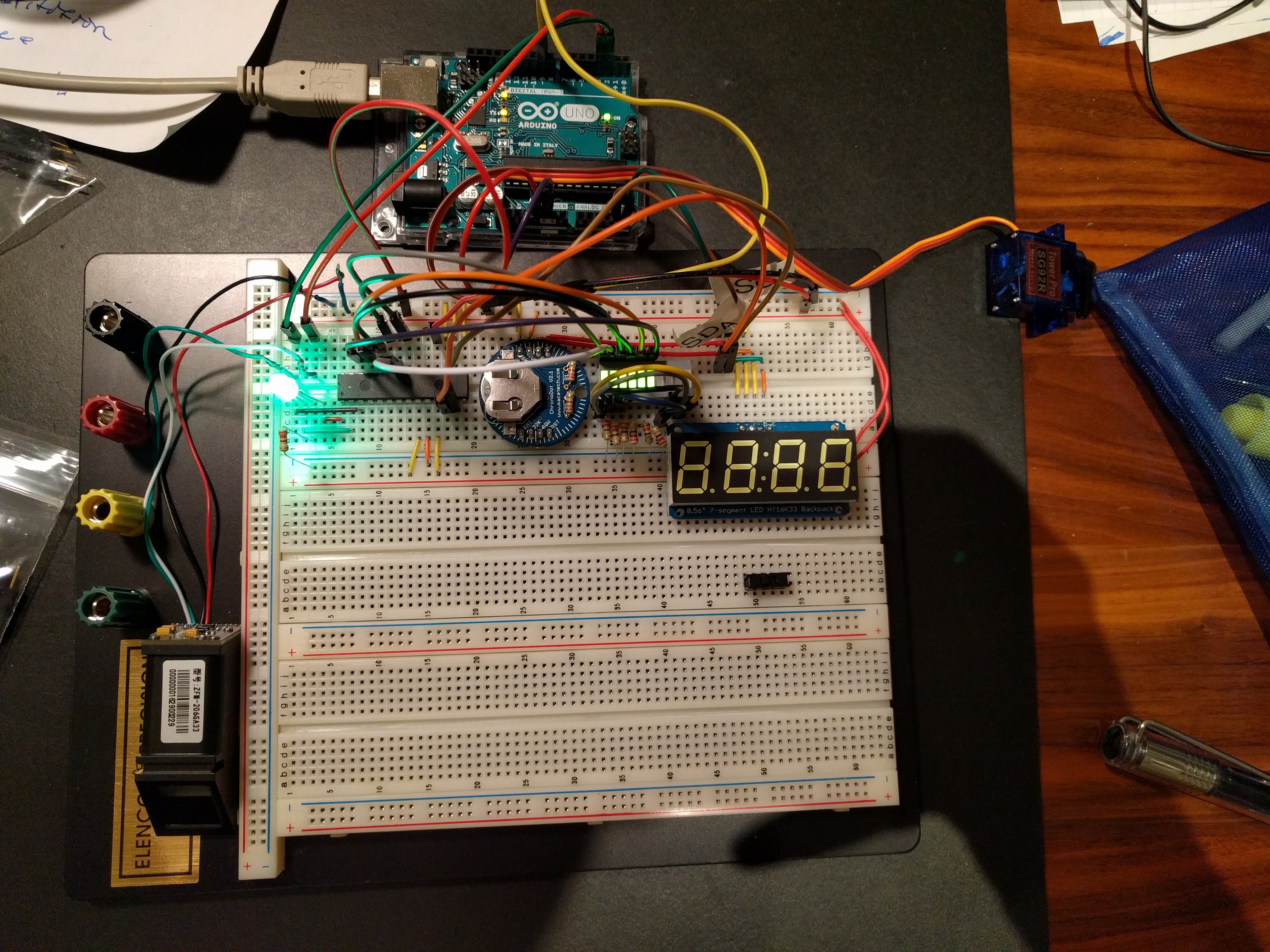 The second and most difficult step of building the FEDL was the board design and fabrication. The process of designing a custom PCB involved learning how to use the Cadsoft EAGLE software. EAGLE is the most common software used for board design. The first step was to create a working schematic within EAGLE. This required finding all of the parts needed for the circuit within the EAGLE part picker. Once the schematic was completed and checked as thoroughly as possible for errors, the EAGLE software was switched to board view. The board view function was used to place the parts on the board in the desired fashion. Once the PCB was laid out properly, the next step was to run the autorouter. The autorouter automatically connects the components as specified in the schematic by placing physical traces that will be printed on the board when it is ordered. Following the completion of the routing, the board was ordered from a PCB fabrication company called Advanced Circuits. The first iteration of the FEDL PCB was delivered a few days later. An issue was encountered with the first PCB in that the pads where the RGB LED would be soldered were connected and would therefore cause a short circuit. The DRC (Design Rule Check) function within EAGLE warned of this, however, it was initially thought that the issue could be simply fixed by cutting the traces on the board manually. Despite the RGB LED issue, the rest of the board had to be tested. The first custom PCB was soldered excluding the RGB LED and it functioned properly. Once it was determined that the first design functioned properly, EAGLE was used to change the design of the board to fix the error with the RGB LED by using a simple pin header component instead of a component specifically designed for a RGB LED. Additionally, a pin header was added to the board for the Arduino software serial pins required to operate the fingerprint sensor, which was omitted from the previous design as it was thought that the fingerprint scanner could be directly connected to the Arduino. The second iteration of the board was ordered and delivered approximately one week prior to the ISP presentation date allowing ample time for soldering and testing. Once the board was soldered and tested, it was mounted along with the Arduino on a slab of acrylic, which acted as a chassis for the components. 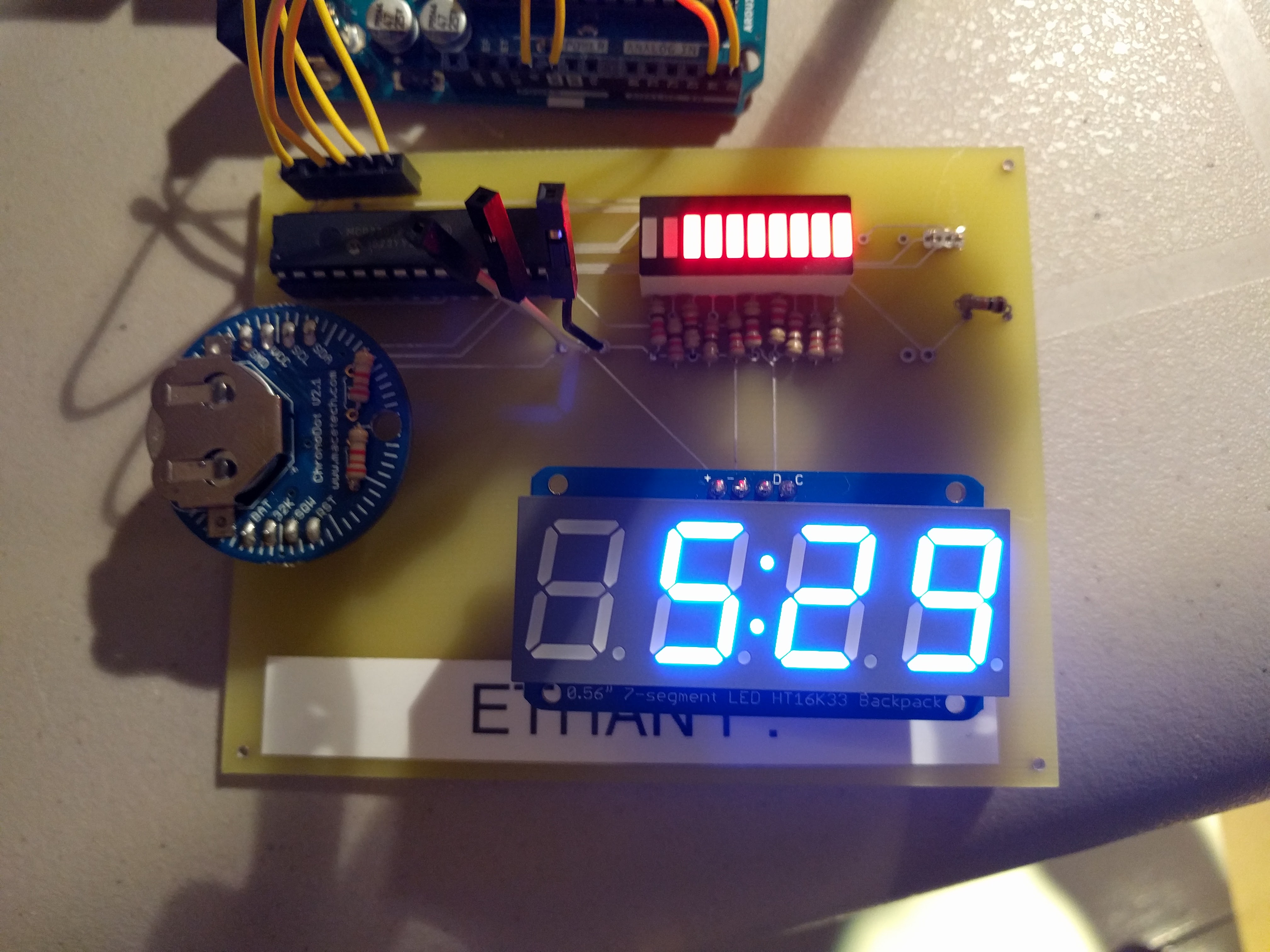 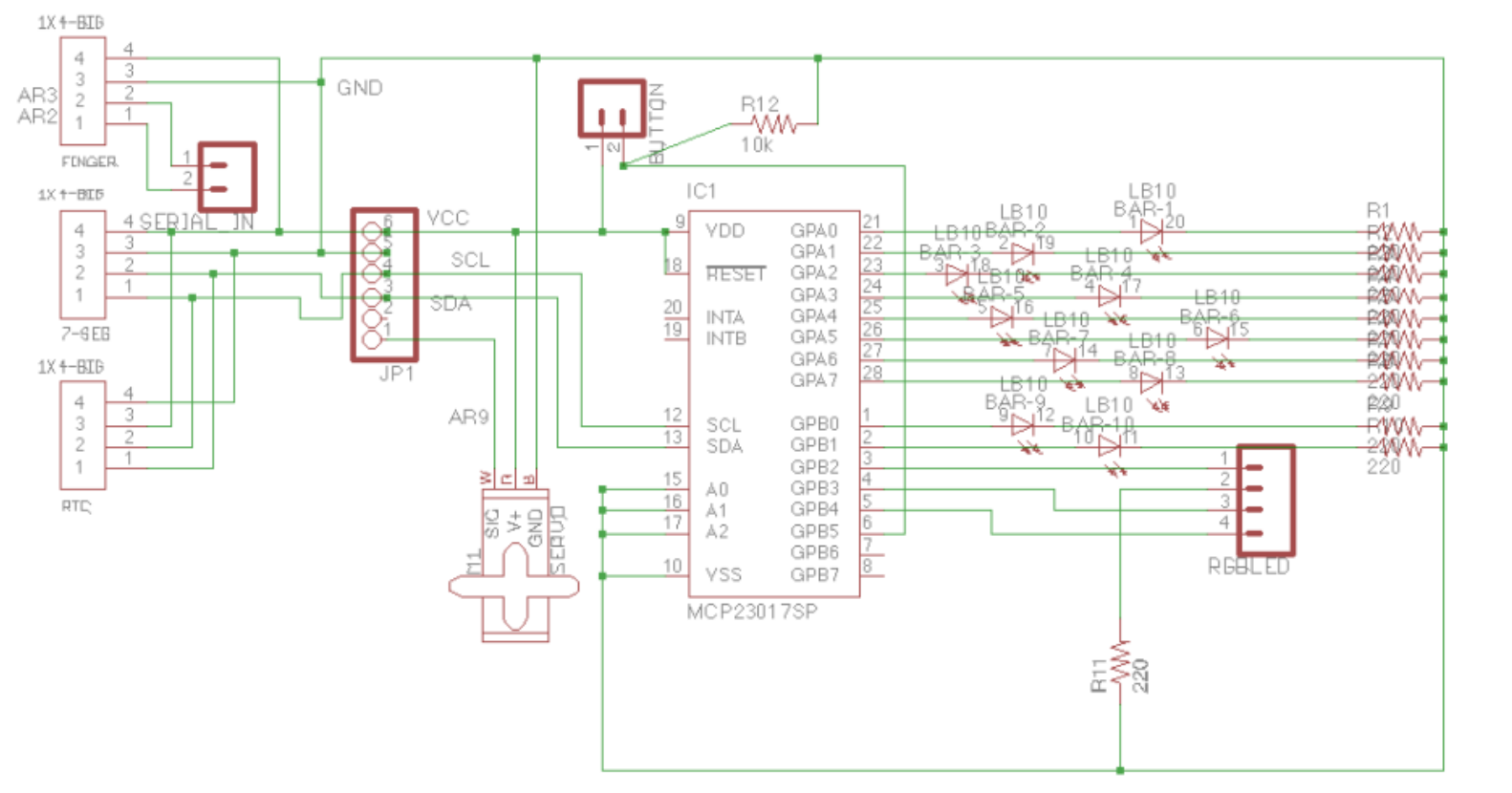 The third and final step of building the FEDL project was the programming. With the custom PCB already soldered and tested, a functioning circuit had been produced and the programming process could commence. The first step of the programming process was using the Wire library to read time data from the Chronodot RTC. Developing this functionality required the use of the Chronodot’s datasheet, which indicated which addresses within the chip’s memory had the required information (such as hour and minute). Once data was successfully retrieved from the Chronodot, two new functions called hour() and minute() were created that returned the current hour and minute as an integer. The time obtained from these functions was displayed on the 7-Segment display using Adafruit’s library. The second step of the programming process was to operate the I/O pins on the MCP23017 in the same manner as on the Arduino. Three functions were developed for this purpose: mcWrite(), mcRead() and mcPinMode(), which recreated the digitalWrite(), digitalRead() and pinMode() functions on the Arduino. Completing these new functions required the Wire library and extensive use of bitwise operators as the functions had to have the ability to change bits in the MCP23017’s registers. The third step of the programming process was to read data from the fingerprint scanner and check if the correct finger is placed on the sensor. Adafruit’s fingerprint scanner library was used to achieve this.

Overall, the FEDL was a challenging project that allowed for growth in the areas of programming and circuit board design. The project culminated in a product that is useful on an everyday basis.