The purpose of the Assembly Binary Game Project (referred to in this report as the “ABG Project”) is to provide a hardware substitute for the now defunct online Cisco Binary Game. The binary challenge was a competition amongst junior ACES where a tournament is held to see who can achieve the highest score in a fixed amount of time. The ABG Project aims to allow students to hold this competition using physical hardware consoles instead of websites like the Cisco Binary Game, which ultimately ended up being placed behind a paywall. The custom PCB allows for many ABG consoles to be created for a potential class set for future ACES students to continue the binary challenge tradition.

The ABG Project allowed the undersigned to improve both assembly language skills and PCB design skills. As the entire project’s code is written in assembly, the ABG Project serves as a good introduction to writing complex and fully featured programs in assembly language. The PCB was also found to be one of the most complex through hole boards that the undersigned has designed to date, due in part to the large number of components as well as unique and unfamiliar components that were used by the undersigned on the PCB, such as transistors.

The ABG Project consists of 8 switches for binary number input, seven segment displays for score and the 8-bit number to create in binary using the input switches. The displays are driven by two 4511 7-Segment display driver ICs and a 595 shift register, since many of the ATmega328P’s digital pins are already tied to other components such as the input switches.

The construction of the ABG Project is comprised of 3 steps; prototyping, PCB design and programming. 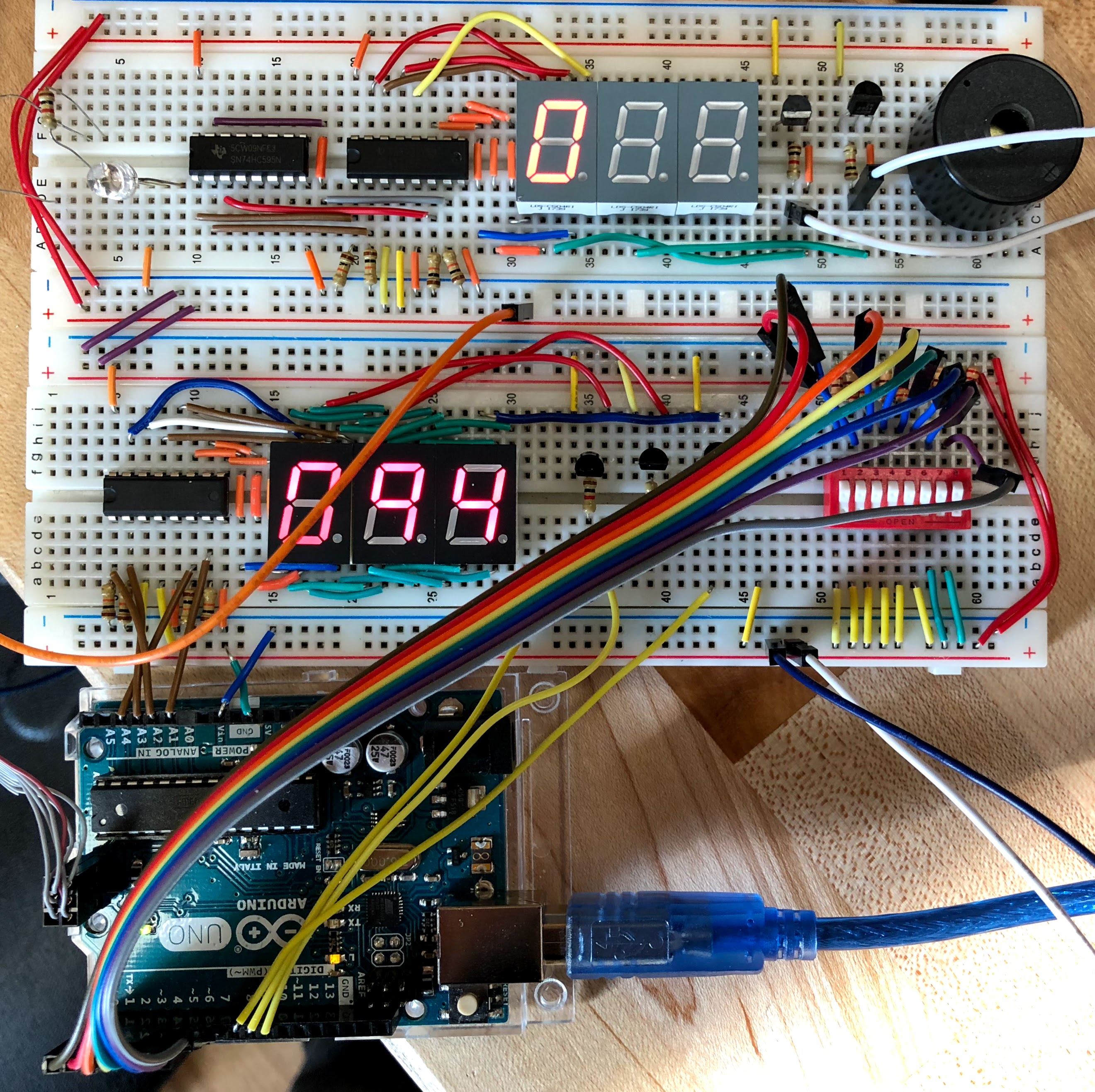 The second step in the construction of the ABG Project is PCB design. The key differences between the prototype circuit and the final EAGLE schematic is the addition of a 5V voltage regulator so the board can receive power from a 9V battery. The Arduino is also replaced with an off board ATmega328P and the accompanying circuitry, such as an ISP header. Notwithstanding the few modifications to the original prototype circuit, the PCB did not fully function when it arrived. The code was seemingly running properly on the board but the displays appeared very dim. This issue was initially attributed to the small trace width of 8 mil being unable to carry enough current to support the 7-Segment displays. As a result, an identical board with larger traces was ordered but the same issue was encountered. Upon further inspection, it was discovered that the dimness resulted from the 1k Ω resistors connected to the base pins of each transistor and the 470 Ω resistors connected to the cathode of each display. Since the PCB had exposed traces, all the resistors were removed and replaced with extra wire connecting the two traces, which lead to the displays running at their normal brightness. A third iteration of the board was immediately ordered to settle the issue completely, however, it did not arrive in time for the creation of this report.

The final and most difficult step of the ABG Project is writing the code for the binary game in AVR assembly. The assembly code is structured in a similar way to an Arduino program with a setup label which initializes all the I/O pins and interrupts, and a loop label where the bulk of the game code runs. The code utilizes two timer interrupts and an ADC interrupt. An interrupt on TIMER2 is configured to run at a frequency of 63 Hz constantly polling for the correct switch combination matching the number being displayed. This interrupt service routine (ISR) also assists in the POV for the displays by running the double dabble algorithm on the new random value, breaking it into its individual digits to be presented via POV in the loop label. The comparison between switch input and the number on display is done using the in command to load the value of the PIND register into general purpose register and compare to the number shown on the displays using the cp command. The breq command is used to branch to a new label called isEqual if the comparison returned true, which increments the score value and loads a new random number to be shown. The random numbers come from random number generator code found on the website “AVR Freaks”, which has been modified to use a random seed from an ADC reading. The use of the ADC requires two interrupts. A timer interrupt from TIMER0 is used to schedule new ADC readings and another ADC ISR runs when that reading is completed. The ISR is called ADC_Complete, which runs when there is a new reading. The new reading is copied into a general purpose register defined as newValue, which is fed as a seed to the random number generator. 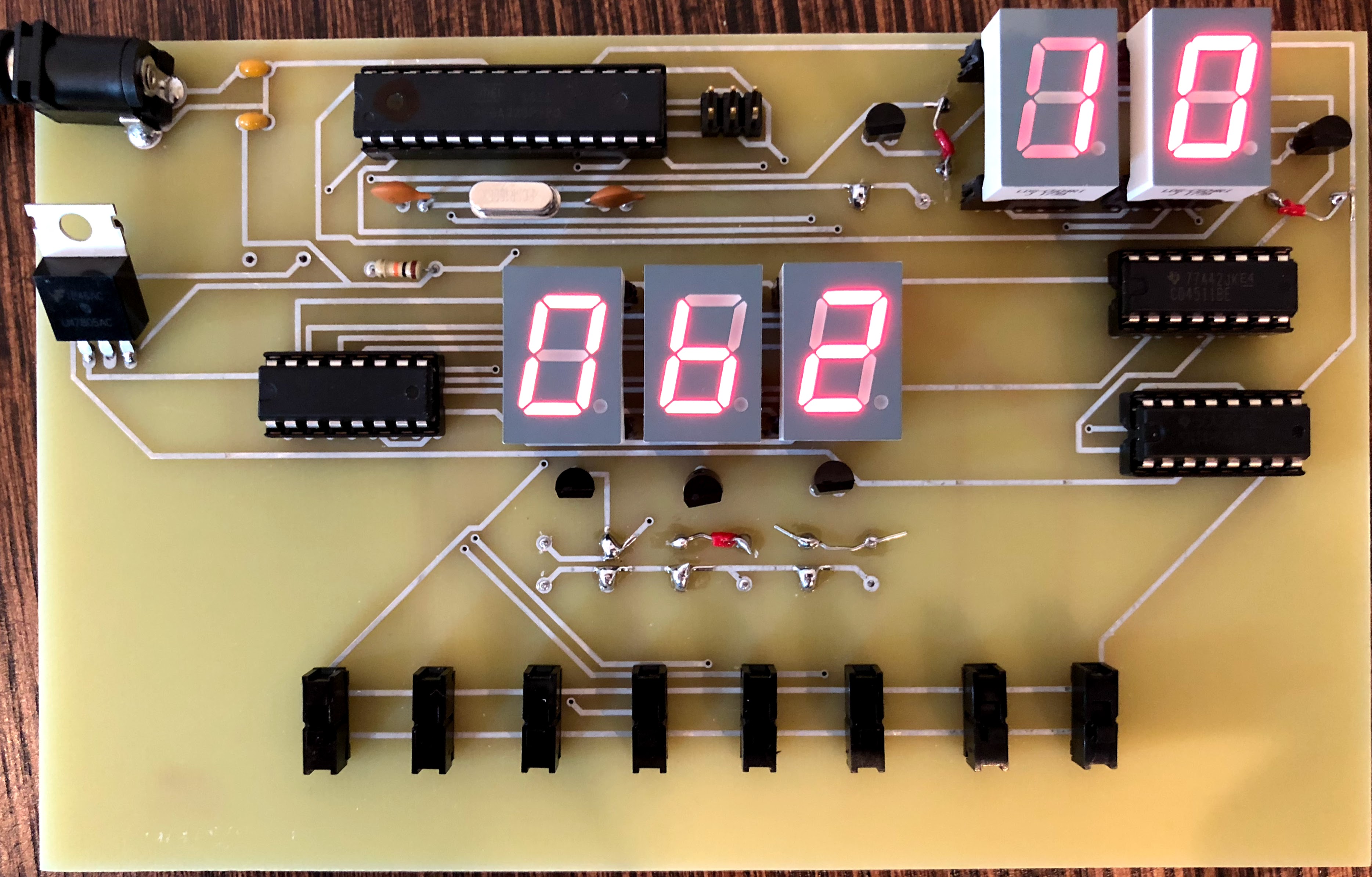 Unfortunately, the demo video only includes the first iteration PCB prototype. The blue prototype had not yet arrived when the video was shot. 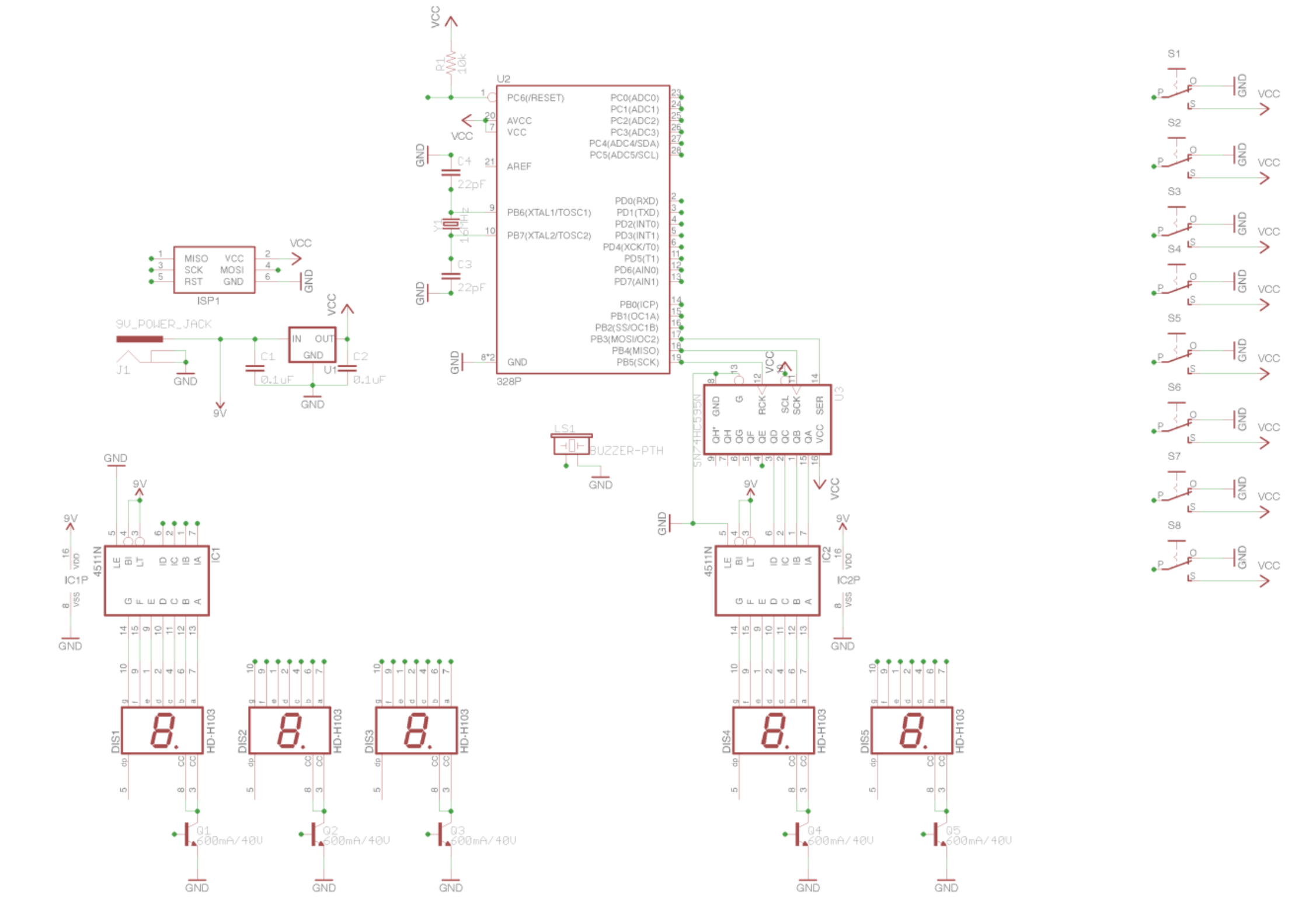 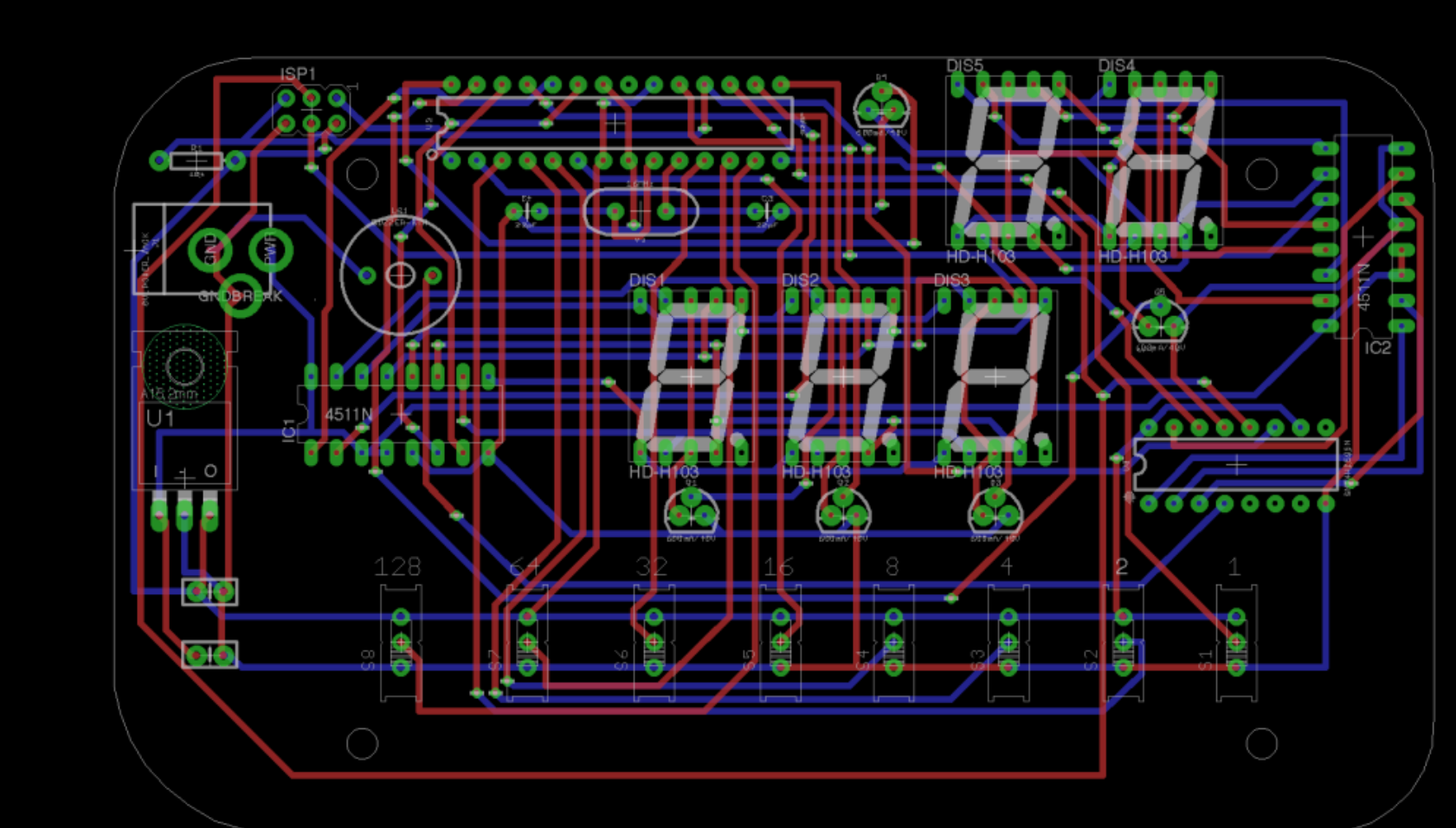 The full EAGLE project files and source code can be found on the unsersigned’s GitHub.

Overall, the ABG Project serves as a fun conclusion to three inspiring years in the ACES program. The project is the culmination of many invaluable skills taught in this course, particularly programming and CAD design. It is also the undersigned’s hope that this project will leave a legacy for future ACES students who wish to take on the binary challenge.